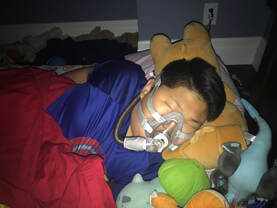 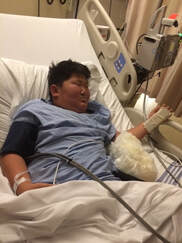 - Hyperphagia (abnormal increase in hunger and appetite that is often insatiable)
- Cardiology issues
- Fatty liver disease (that required a liver biopsy)
- Gastrointestinal issues
- Urology issues (that required surgery)
- Autonomic nervous system issues (that prevent him from being able to manage aerobic activity)
- Compromised immune system
- Significant decline in physical stamina and energy (this has been gradual over the past six years but
Joshua now requires the use of a wheelchair to conserve energy, when an activity requires more than
than a couple of hours of  walking e.g. traveling in an airport, day at Wonderland, Disney World etc.).  ​
​Children on the severe end of the spectrum can also exhibit a host of life-threatening symptoms that often require frequent hospitalization, surgeries, life saving procedures and the need for 24/7 care.            - Hypoventilation (a condition which does not allow an individual to breathe effectively during sleep and sometimes during
wakefulness which inevitably requires the child have a tracheostomy and ventilator in order to breathe)
- Neuroendocrine tumours (which can be cancerous and often require surgery to remove the tumours)
- Gastrointestinal dysmotility (which often leads to the child requiring a feeding tube)
- Autonomic dysfunction (a life-threatening acute disorder that alters body temperature, blood pressure, heart rate, respiratory
rate, sweating, and muscle tone)
​​A summary of ROHHAD Symptoms ...
• Rapid Onset Obesity.
This is most commonly the first symptom and it will happen over a 6-12 month period where the child will gain between 20 and 30 pounds in weight.
• Hypothalamic and Endocrine Abnormalities
These can develop at any point, but normally after the rapid onset obesity and include an inability to maintain normal water balance in the body, low thyroid hormone, low growth hormone, early or late puberty, high prolactin levels and other abnormalities. Children with ROHHAD may not have all of these endocrine abnormalities; however, most children experience at least some of them.

• Central Alveolar Hypoventilation (A breathing abnormality).
Despite having healthy lungs, the breathing function becomes severely impaired. All children with ROHHAD will develop this key feature and it will be apparent during sleep hours. Ventilation is required to treat this life- threatening part of the condition. In more severe cases of ROHHAD, the central hypoventilation is apparent in the children whilst awake as well as asleep. This part of the life-threatening condition means that
​the children are at risk of cardio-respiratory arrest.

• Obstructive Sleep Apnea
This is often treated with ventilation but may also require surgery to remove tonsils if they are the considered the source of the obstruction. It is often the obesity in children affected by ROHHAD that is the obstruction and causes the difficulty breathing.

• Intestinal Abnormalities
​These motility issues result in chronic constipation and/or diarrhea. The children are often treated with medication, and in more severe cases of gastrointestinal dysmotility, surgery is required.

• Altered Sensations of Pain
Some children feel little or no pain when it would be expected they should. High tolerance of pain is often seen. At the same time, they can also feel excruciating pain when it is not expected.

• Body Thermostat Dysregulation
High or dangerously low temperature changes can occur.  Icy cold hands and feet, profuse sweating and many other symptoms reflecting dysregulation of autonomic functions can and will occur in children with ROHHAD.

• Difficulty with mobility
Movement is impacted due to the size of the body and also due to the life-threatening part of the condition. Some of those affected are restricted in exercise due to the danger and risk of cardio-respiratory arrest.

• Seizures
Not all children with ROHHAD experience seizures, but they can be a symptom that is present.

• Hyperphagia
This is an abnormal increase in hunger and appetite that is often insatiable. Despite eating a full healthy meal, the children will continue to feel hungry.

• Tumours of Neural Crest Origin
NETS are present in an estimated 40 percent of those children diagnosed with ROHHAD. The tumours can be found in the chest, abdomen, or anywhere along the sympathetic nervous system chain and can develop at any age; they can be both malignant and benign.